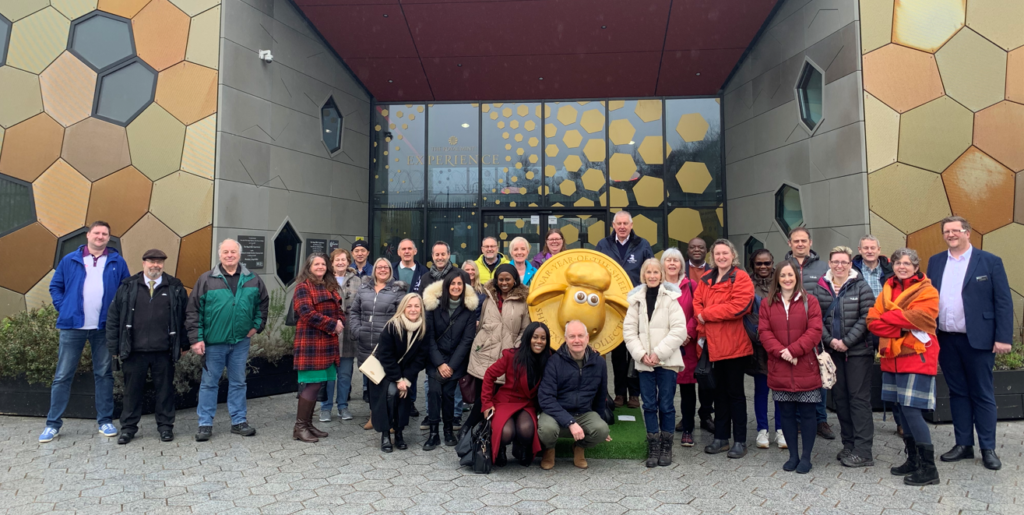 South Wales was the destination for WeWantGroups.com's first fam trip of 2022, and what a trip it was!

It gives me great pleasure to finally put together a write-up on a group “Fam Trip”, after what seems like an eternity of being surrounded by the same 4 walls of the WeWantGroups HQ office!

After speaking at great length with the legendary Steve Reed from Steve Reed Tourism last year, the excitement I had for being given the opportunity to provide the media coverage for this event was almost palpable. Having worked with a couple of the venues, both in the past and present day, yet having never actually visited them before, I was literally like a kid at Christmas on Saturday evening before we headed to South Wales on Sunday afternoon.

I can truly attest to the fact that the Coin, Coal & Cheers bespoke package is a thoroughly tremendous, insightful and welcoming experience for groups, and here is why…

Parkway or the Highway! 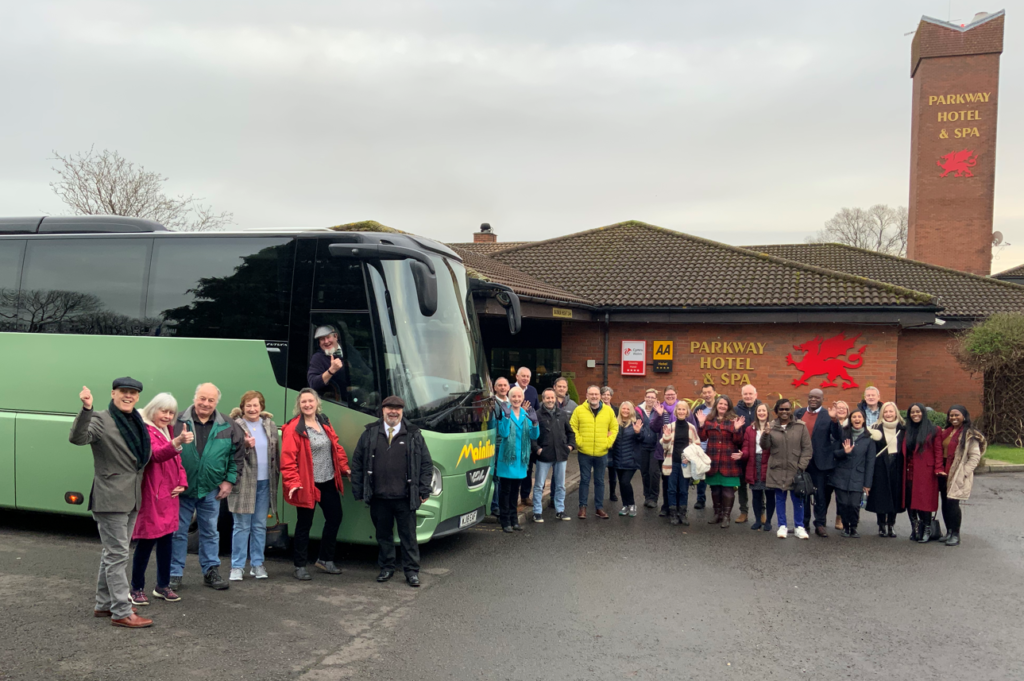 The Parkway Hotel & Spa in Cwmbran is the quintessential “hub” for any group visiting the region. From the moment we walked into the cosy and tranquil foyer and reception area, we were almost engulfed with a welcomed feeling , made even more poignant by the huge roaring open fireplace, which was a glorious sight and feeling after our journey down!

After checking into our room, Beki and I had a little wander around to get a feel for what it was like. It didn’t disappoint. Although regrettably not having enough time to be able to take advantage of the pool and spa facilities (we’ll be heading back down very soon though, Beki has made me promise!) it looked absolutely sensational. The dining rooms were, to use the native lingo, “lush”, the bar area was relaxing & spacious, put simply we felt home from home in an instant.

And the food! My days…. Mouth watering. 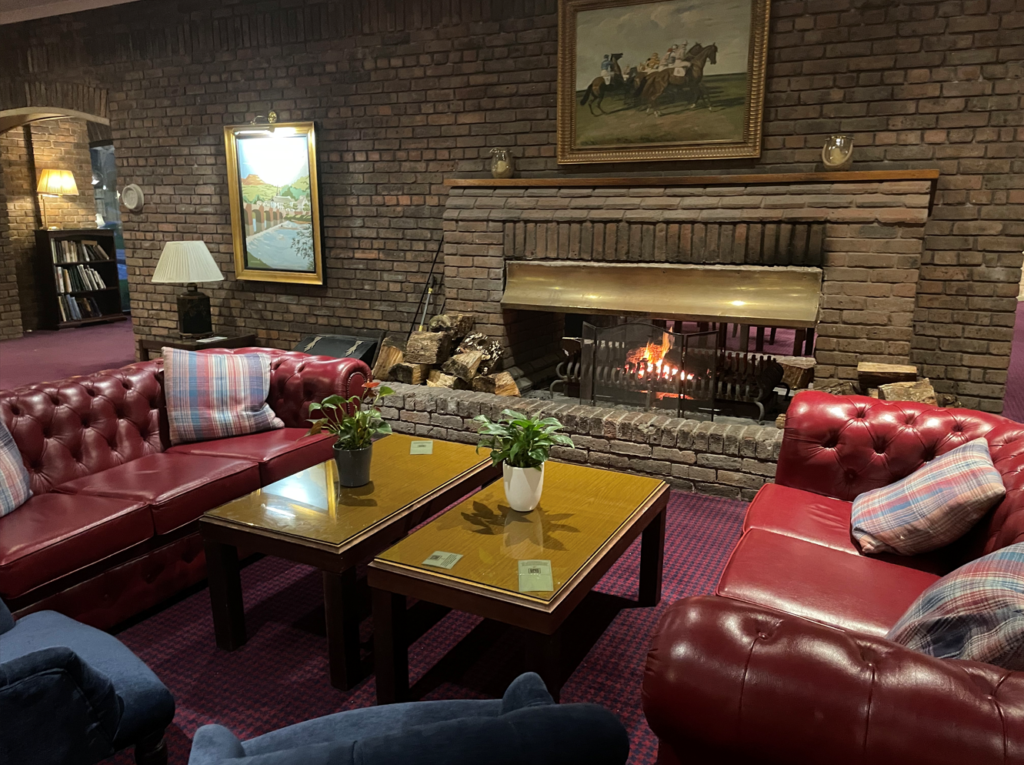 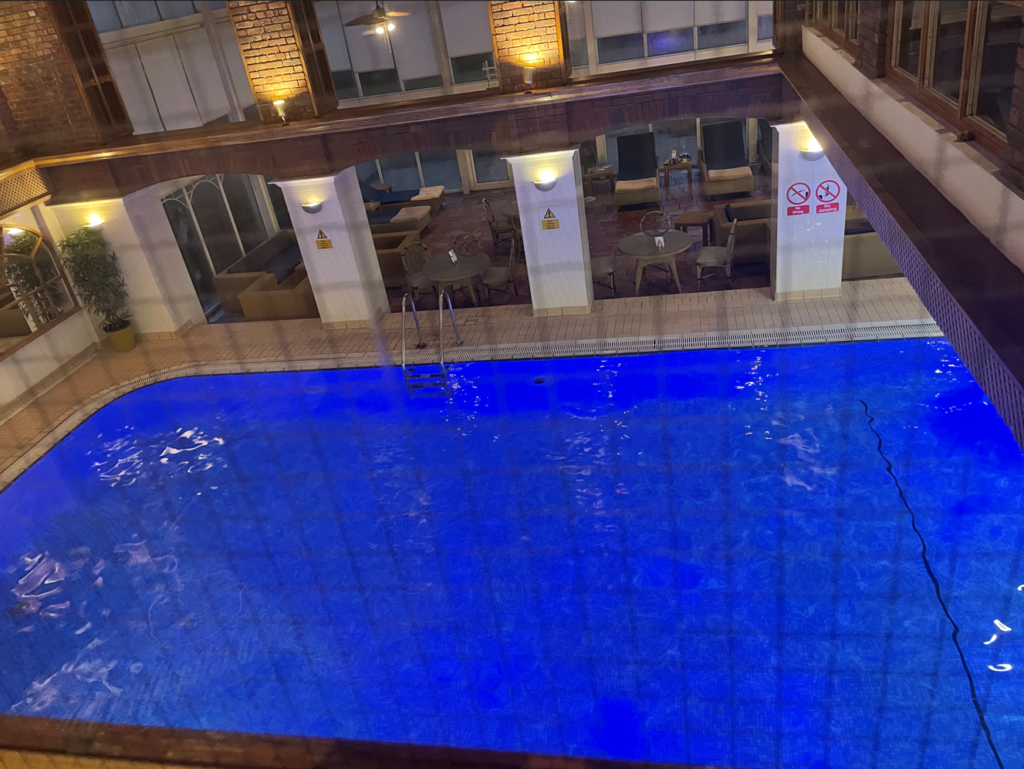 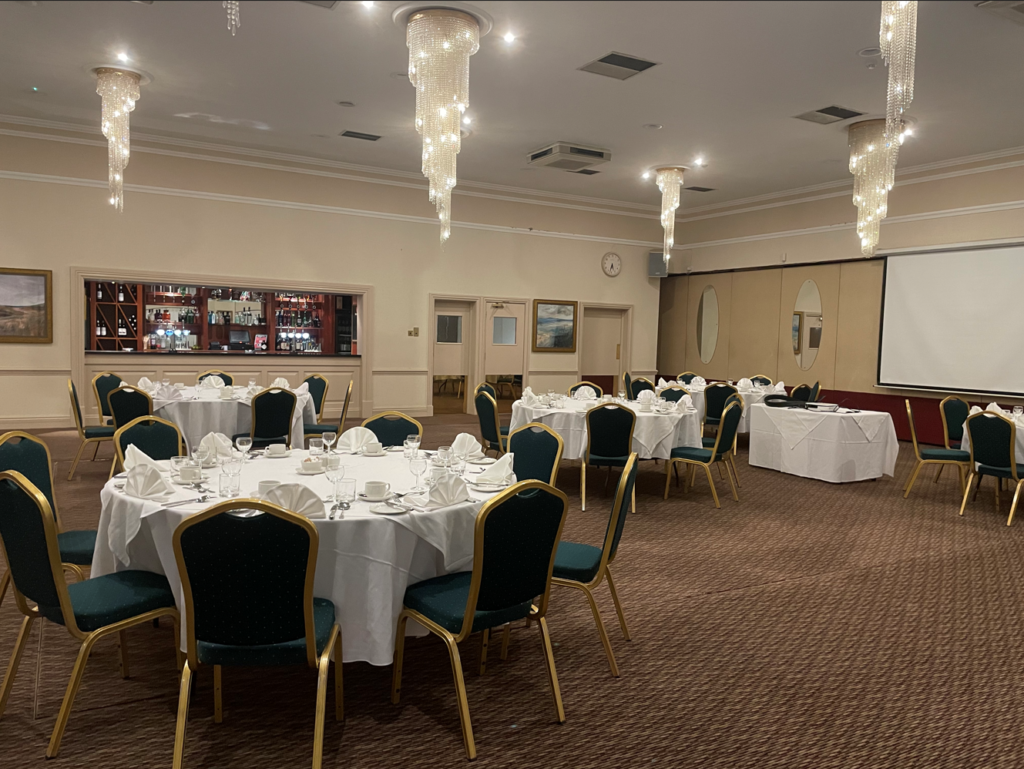 After an amazing 3 course meal we had the pleasure of hotel managers’ Kerry & Sarah’s company over a few drinks. I am struggling to remember the last time I went to a hotel where every single member of staff has a smile on their face and a friendly greeting for everyone they meet. Kitchen & bar staff, cleaning staff, waiting staff, front of house, management, every single person at the Parkway truly does go out of their way to make your stay a relaxing and fulfilling one.

Group rates and spa packages are available, all for a very reasonable price. Check out their website HERE for further info or contact the sales manager Sarah Higgs on 01633 871 199/shiggs@theparkwayhotel.co.uk

The early bird catches the worm, or in our case, samples gin at 10am in the morning! Haters gonna hate!

We boarded the Mainline coach, driven by Karl, and headed for Hensol Castle Distillery. As we entered through the gates I noticed a rugby training pitch within the grounds of the castle. Being an avid rugby fan (England, sorry) and a former player, I was amazed by the quality of the pitch. Definitely another level from the quagmires I used to play on. It was at this point we were told it was the training ground for the Welsh national rugby team AND national football team! Judging by their result however 2 days prior, I was surprised to see that they weren’t being put through their paces as we got there, but the less said about that the better I suppose!

We were greeted at the entrance by Steph Metson, marketing manager of the Hensol Castle estate. The reception area was immaculate and had a very modern decor, all of which was lost on my esteemed colleague as she was drawn almost hypnotically towards a very large display case filled with bottles of gin! As you can see below, that’s a look of sheer unbridled joy! 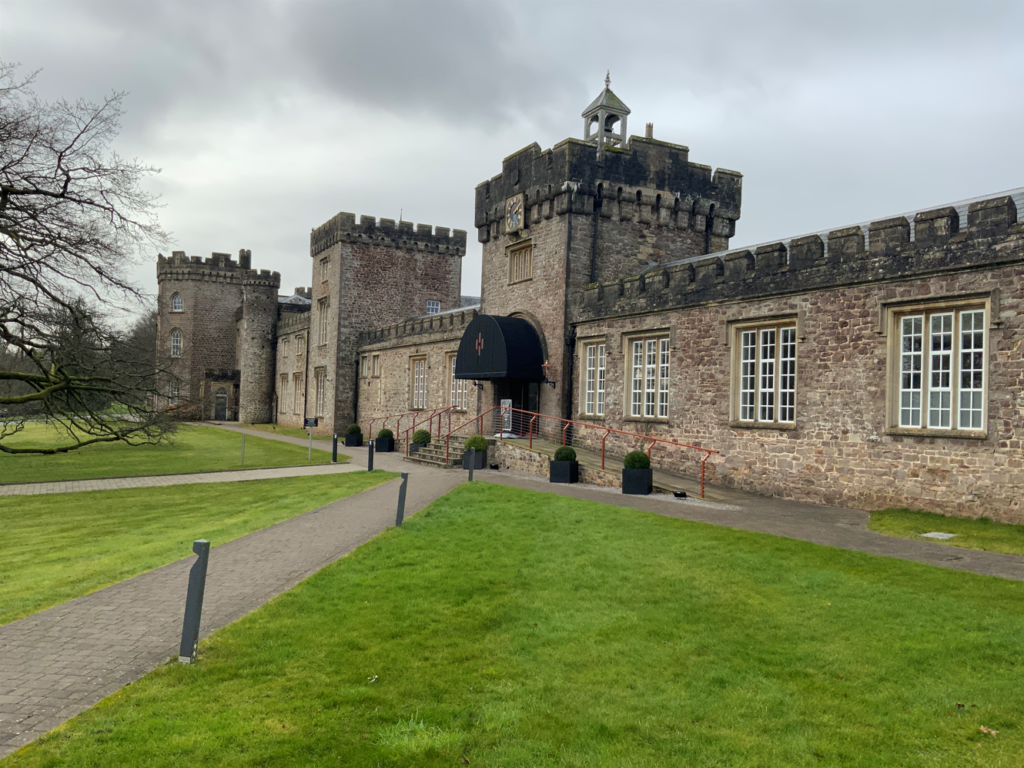 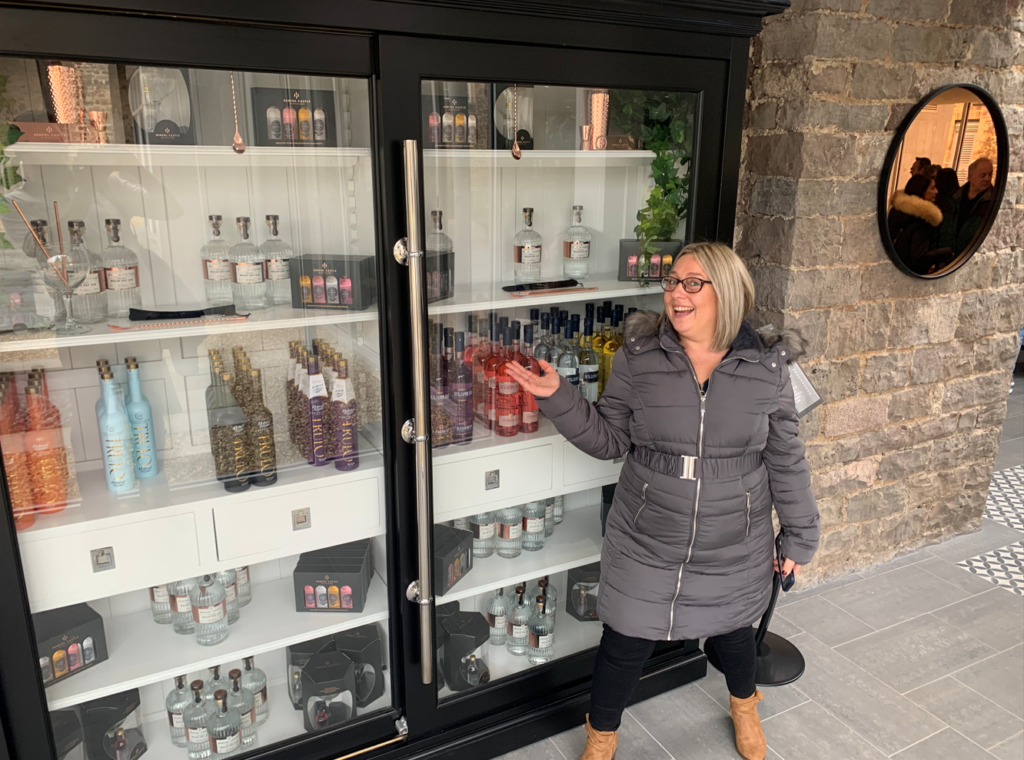 The tour started the way you’d expect, with a free sample of what’s on offer. Alas, this was no ordinary sample. It was, without a doubt, one of the finest G&Ts I have ever had. Smoother and cooler than a Sean Connery quip, the gin in question was their blackberry edition. I was temped to grab a second glass but refrained for fear of some funny looks from my fellow tourers!

Our friendly and very knowledgeable guide invited us to sample 4 of their different straight gins (smaller measures this time, thankfully *hic*) and then took us through the “timeline tunnel” where a full history of the castle along with some very insightful stories about gin in general were spread along the walls. I won’t spoil the story for you, but I certainly learned a few things and had a few “Ahhh, so that’s where that phrase comes from” moments.

We were then shown to the “Gin School” where you can see first hand the intricate science behind gin craftsmanship, before concluding the tour and making our way onto the next destination. 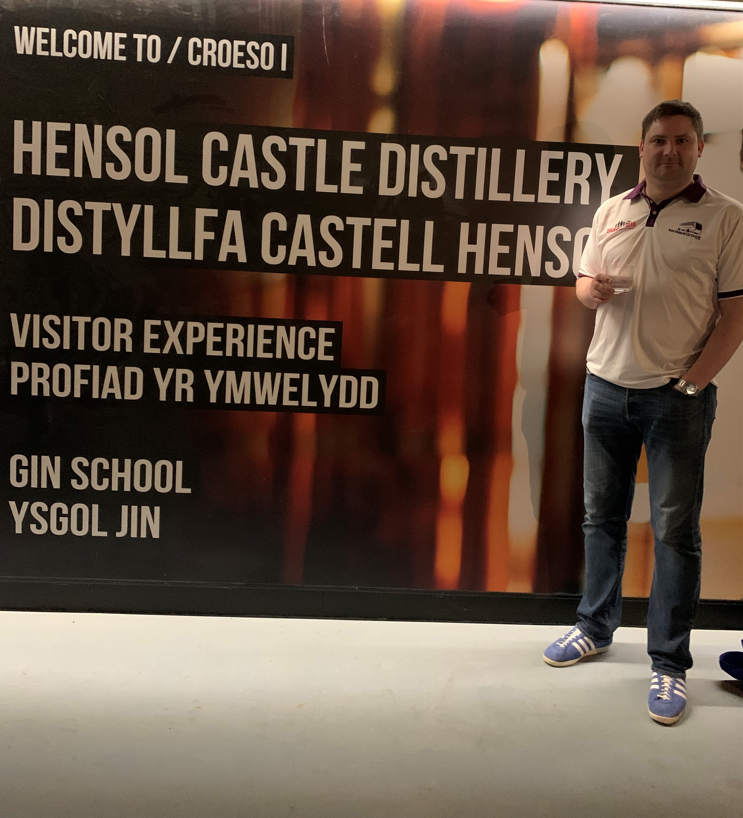 (Left) WeWantGroups.com’s MD Martin doing what he does best; enjoying an alcoholic beverage and trying to hide his ever-expanding stomach!

(Above) Shot of the Hensol Distillery bar

(Below) The Timeline Tunnel 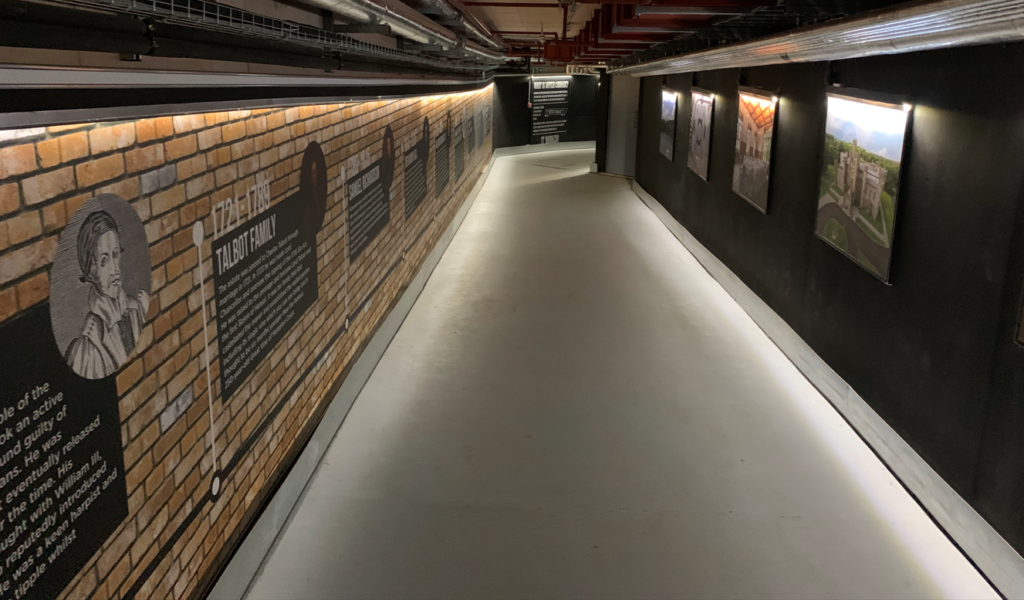 To enquire about tours of the Hensol Castle distillery, contact them on 01443 667999 or visit their website HERE

A jubilant Jubilee at the Royal Mint Experience

Next up was the “Coin” leg of the trilogy; a behind the scenes tour and lunch at the wonderful Royal Mint Experience.

Having known the business development manager Paul Brandwood for a while and worked with each other closely over the last 12 months or so, I was supremely excited just to see what was in store for us at the world famous coin manufacturers.

It certainly didn’t disappoint. After a detailed and enthusiastic explanation as to the coin-making process in their initial stages by our guide, we were then taken behind the scenes at the manufacturing warehouse. I think it’s safe to say I had never stood in the same room as over £100million worth of hard currency before! They don’t just make coins for the United Kingdom either. With only 6 operational Mints in the world, it’s a competitive game to secure the manufacturing contracts for country’s currency, and the Royal Mint has over 80 different countries on their manufacturing list!

From there we moved into the RME exhibition, and I was astounded as to how much history there is behind the humble coin. From historical artefacts from over 1,100 years ago such as the Alfred the Great penny, right up to official priceless medals made for the London 2012 Olympics and the commemorative coins made for Queen Elizabeth II’s Platinum Jubilee earlier this month, there is so much to learn about.

Groups of 10 or more can take advantage of an amazing price of £17.99pp for the full Royal Mint Experience tour along with a lunch menu (or £22.50pp with a buffet). And let me tell you, it’s worth every penny, especially if you’re a foodie like me! 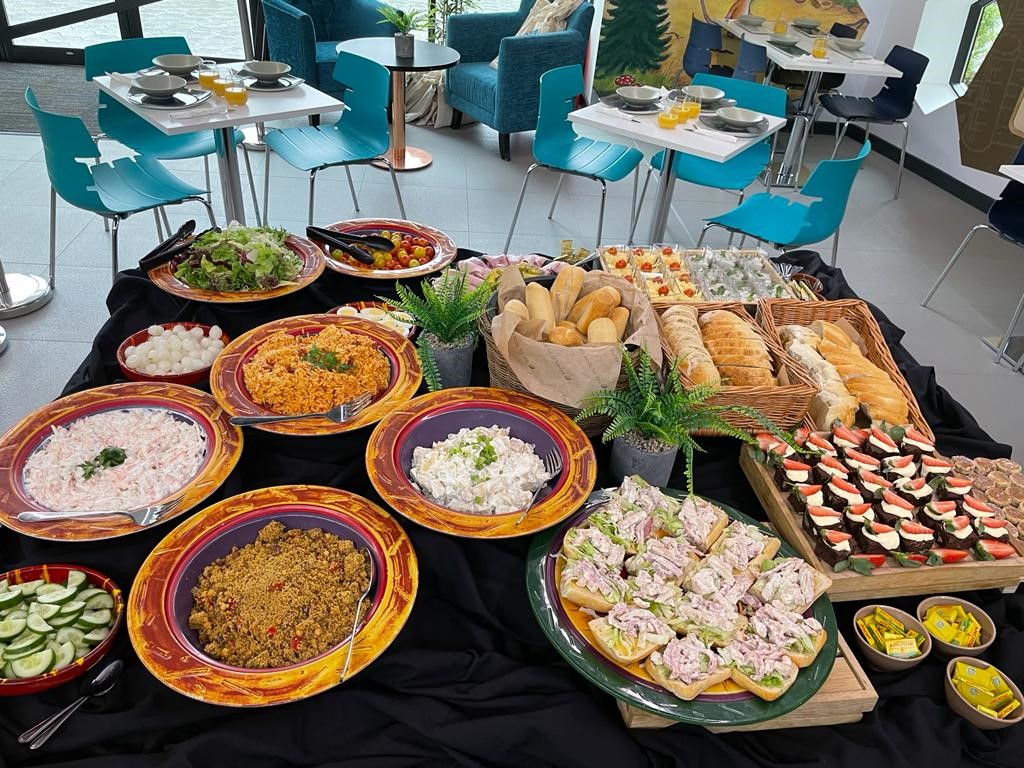 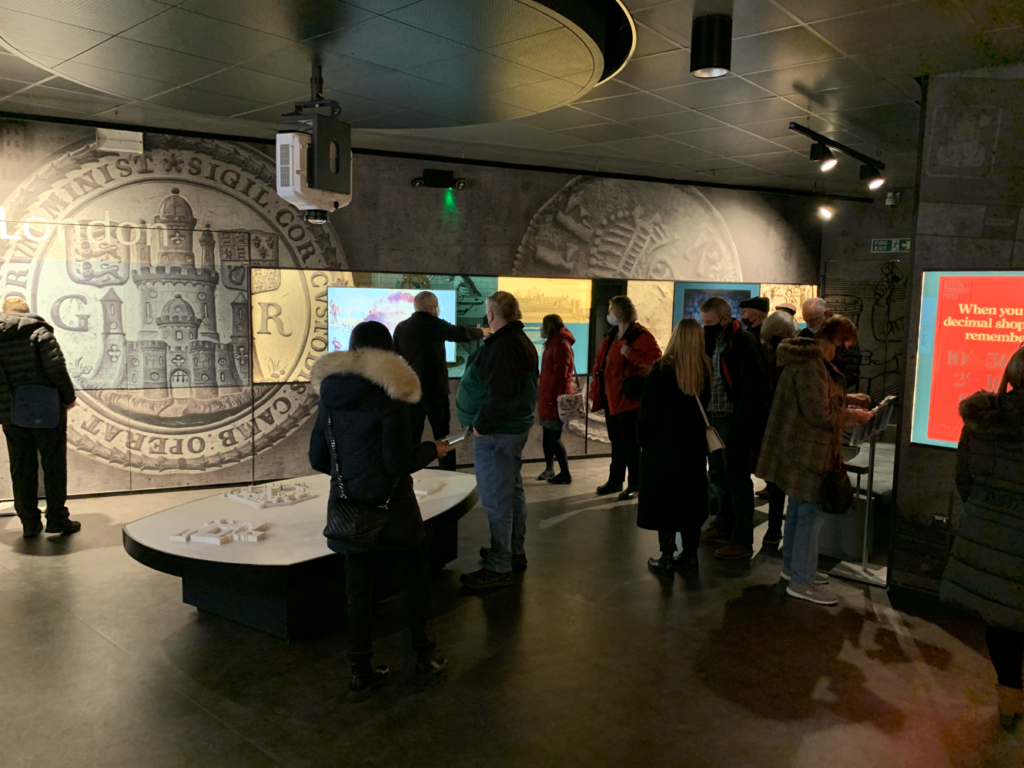 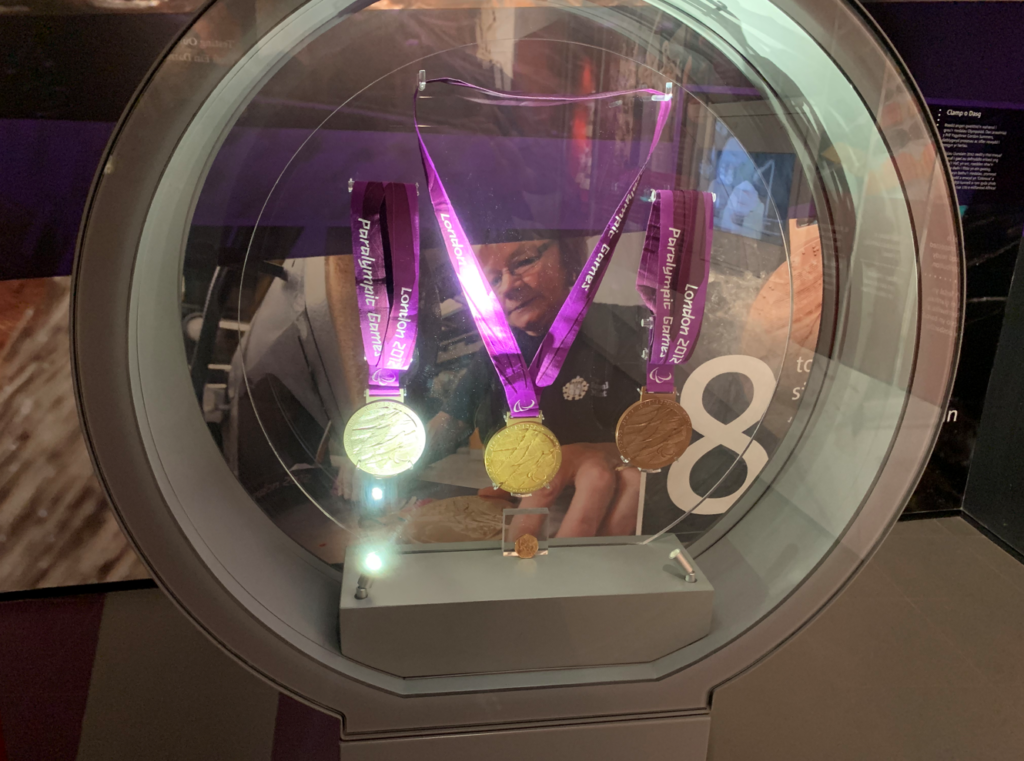 To enquire about tours of the Royal Mint Experience, contact them on 01443 682036, email groups@royalmint.com or visit their groups website HERE

Quick fact* - Neil Diamond used to be called Neil Coal, but then the pressure got to him...

*Obviously this isn’t true, but it leads me perfectly on to the final part of our day tour, a visit to the Welsh Mining Experience at Rhondda Heritage Park.

After a short drive through what I can only describe as a “perfect example of what you would imagine a quaint Welsh mining town would look like” we arrived at the Welsh Mining Experience, upon which we were treated to a glass of Prosecco (two in my case!). Not only were our tastebuds tantalised, but also our ears, in the form of a Welsh male choir. After a rendition of a couple of local songs and of course the infamous Delilah made famous by the one and only Sir Tom Jones, they treated us to an awe-inspiring rendition of the National Anthem. As I mentioned previously, I’m a massive England rugby fan, so have heard the Welsh national anthem a thousand times before, but even I had a lump in my throat as those rich tenor notes reverberated around the room. A truly remarkable experience to see first hand. 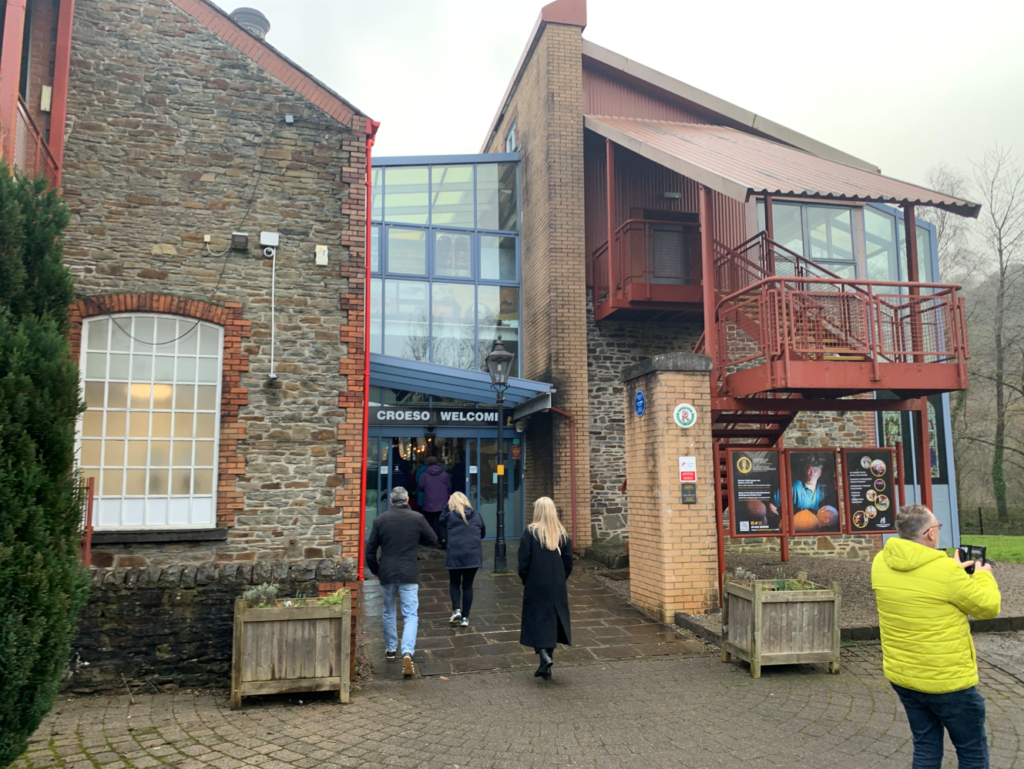 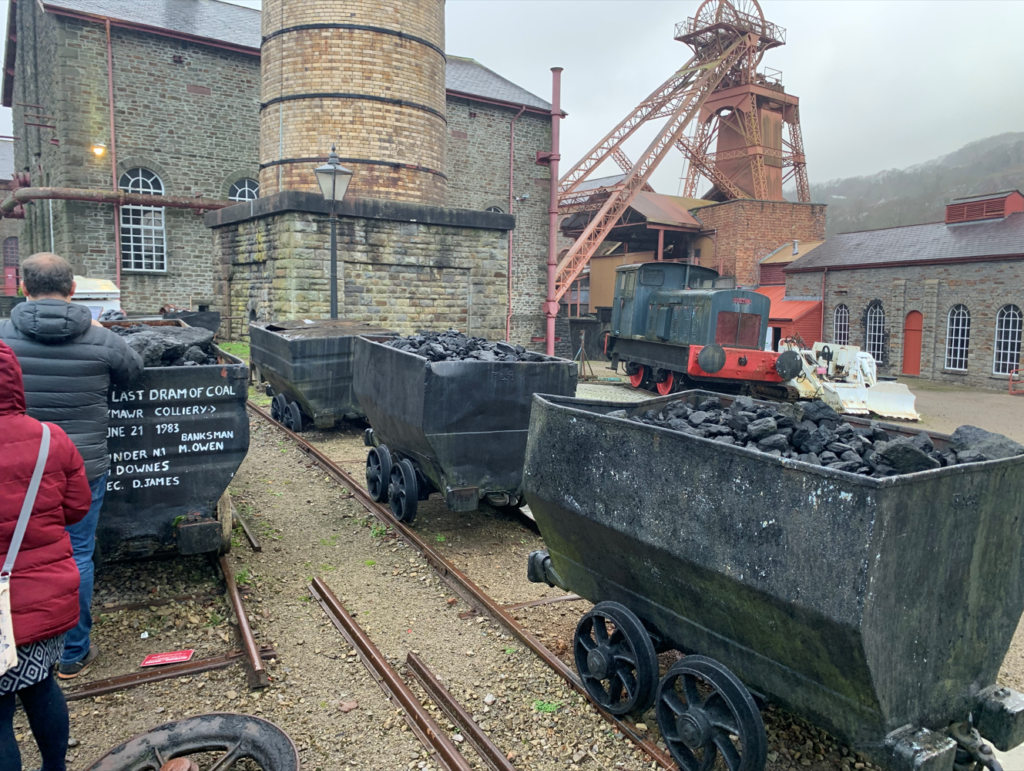 We then moved onto the tour itself, led by our guide whom had worked below the ground we stood on for well over 30 years. Hearing his first hand experience of the daunting and extremely dangerous task these men and indeed women and children faced on a daily basis, it truly does make you realise how lucky and almost “pampered” we are in today’s society. A truly humbling and sobering realisation of what so many people went through back in the day to keep British industry thriving.

After a detailed walkthrough the engine rooms which operated the crane systems used for fetching coal up and taking miners down, we were ourselves invited to take a ride in the very lifts that were used. Remarkable to think that as many as 25 miners at once were squeezed into these lifts when I myself couldn’t even stand up straight in them!

1. “What a helmet…” – Interpret that as you wish.
2. One of the lift cages that carried miners down the shafts as quick as 45mph! 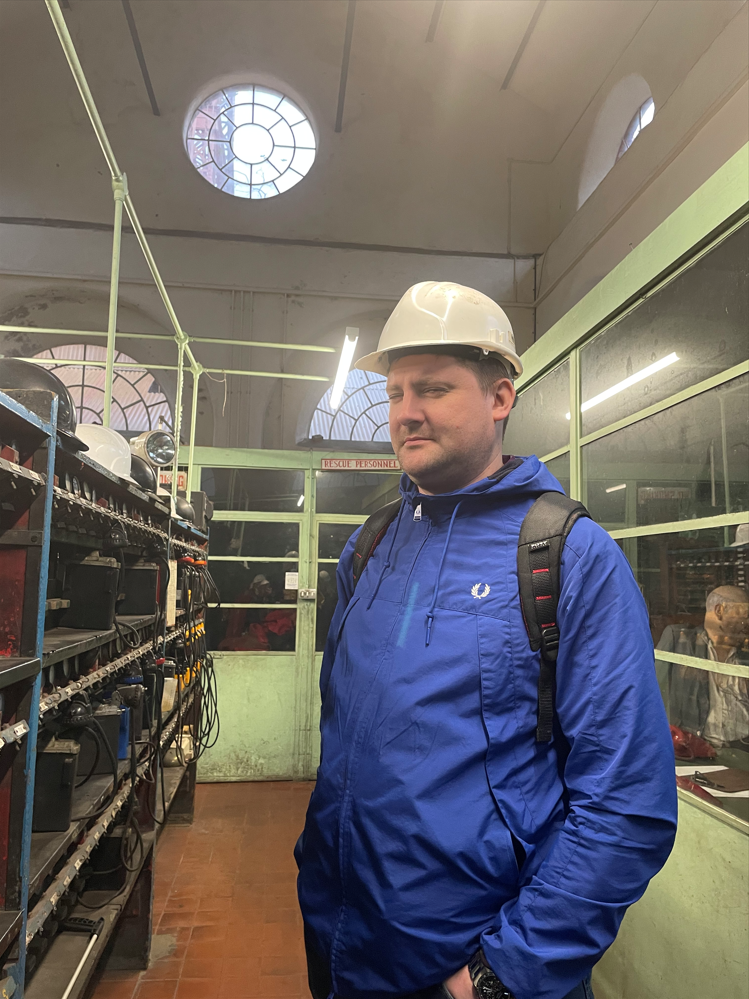 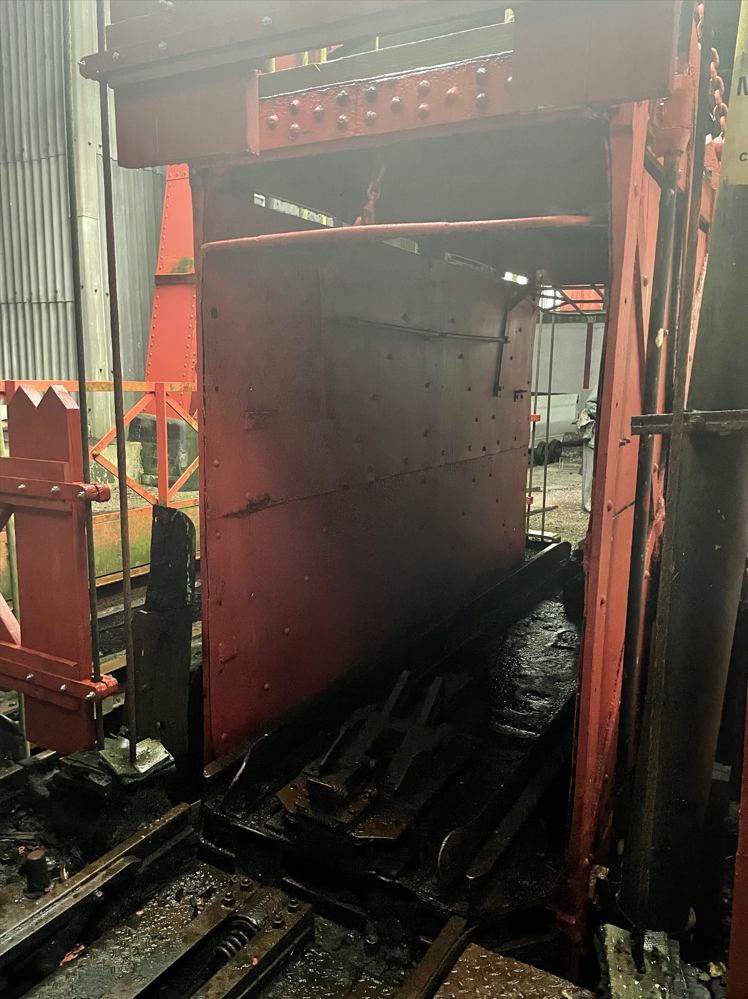 As we reached the bottom of the mineshaft, again it was another very sobering experience. Dark, cold, eerie, strange smells, an overwhelming sense of destruction and devastation. Reminded me of going to the in-laws’ house.

Thankfully we were of course in absolutely no immediate danger as the shaft and tunnels have been made 100% tourist friendly, but there are certainly plenty of surprises at every turn and it gives you an authentic feel of what it was like to be down underground for 10-12 hours a day, 6 days a week. 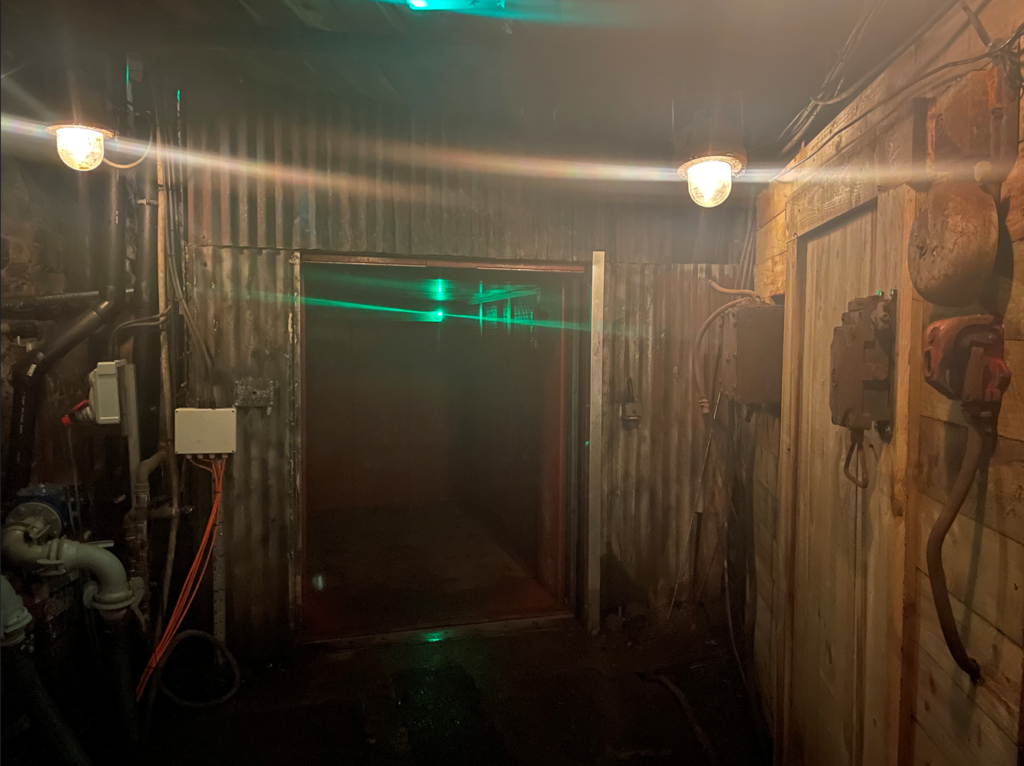 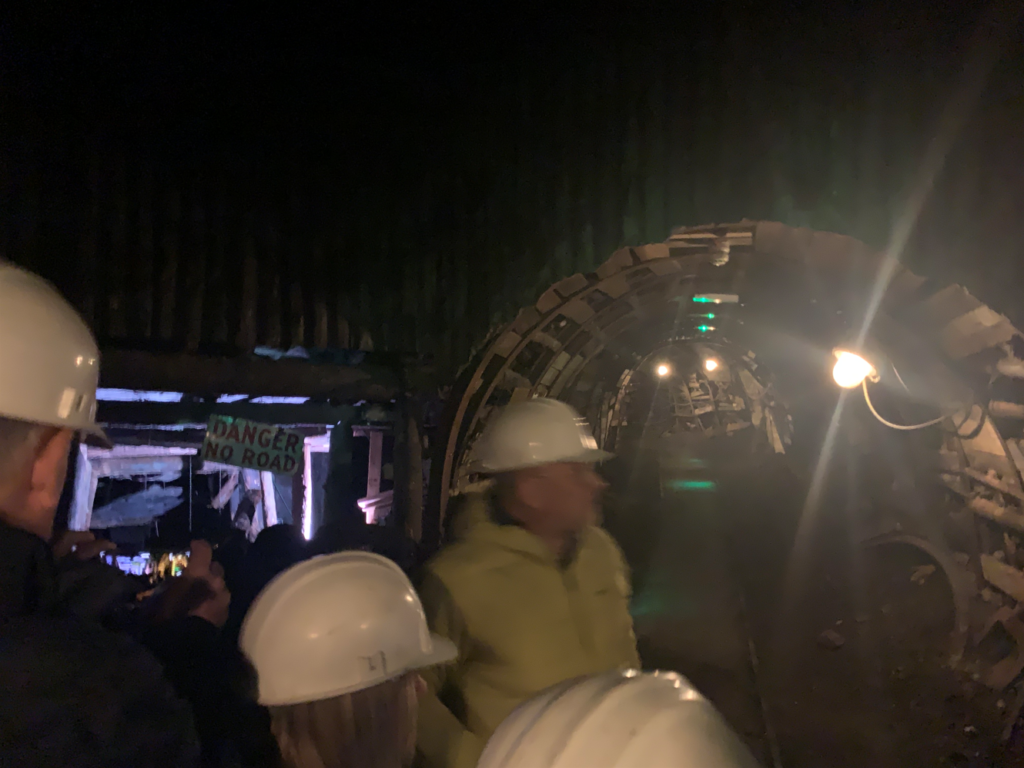 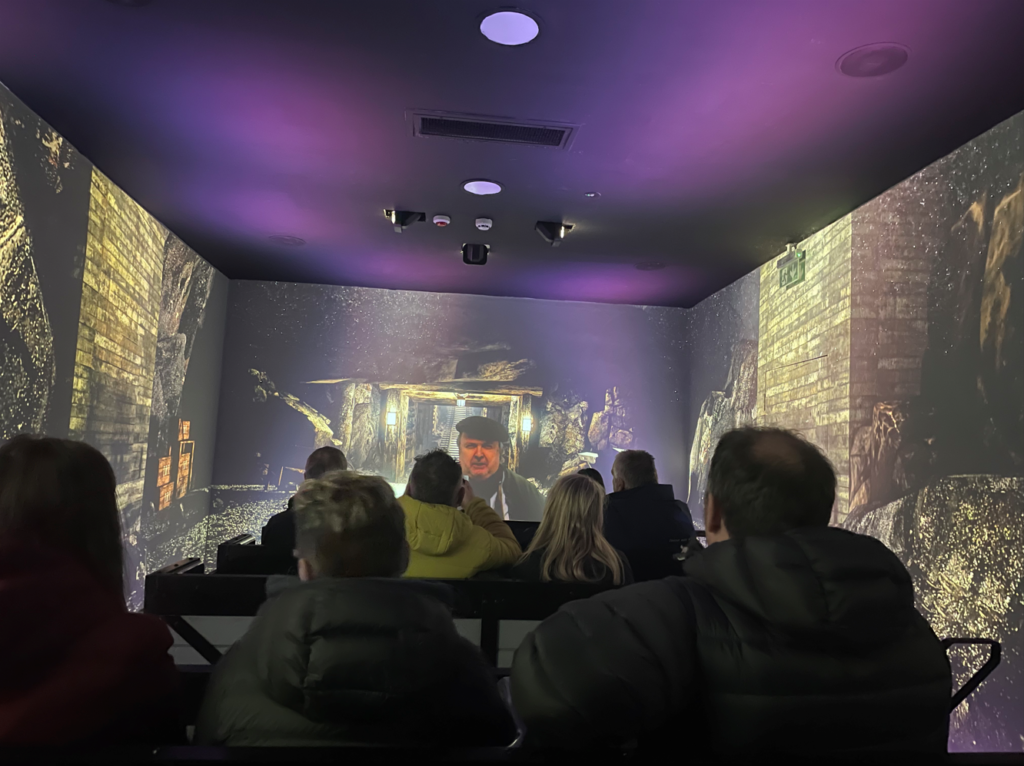 To enquire about tours of the Welsh Mining Experience, contact them on 01443 682036 or visit their website HERE

And thus concluded our tour and first experience of the Coin, Coal & Cheers bespoke trip. A rich and varied tour, which educates, entertains and enthrals from start to finish. One which I hope you will get to get to do yourself one day.

If you and your group are interested in visiting either of the attractions individually or as a package deal, you can find all of their contact info and map links below.

Thanks for reading, and I hope to bring another WeWantGroups.com review to you in the not too distant future. 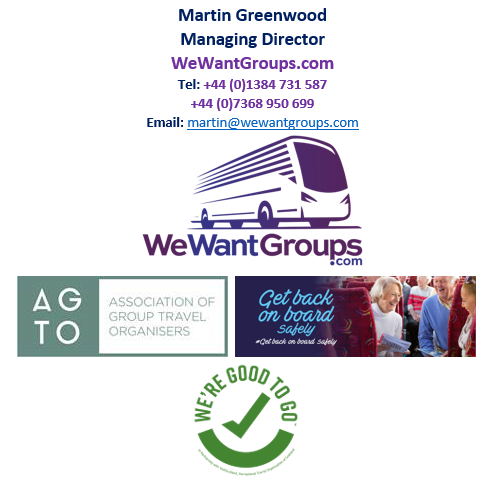 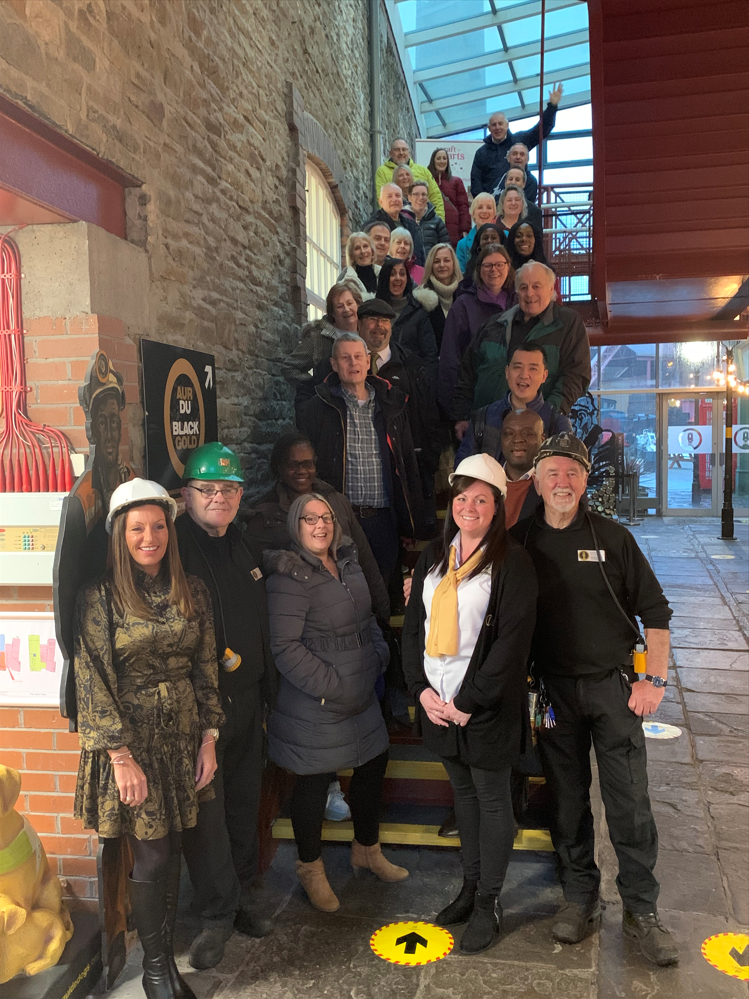